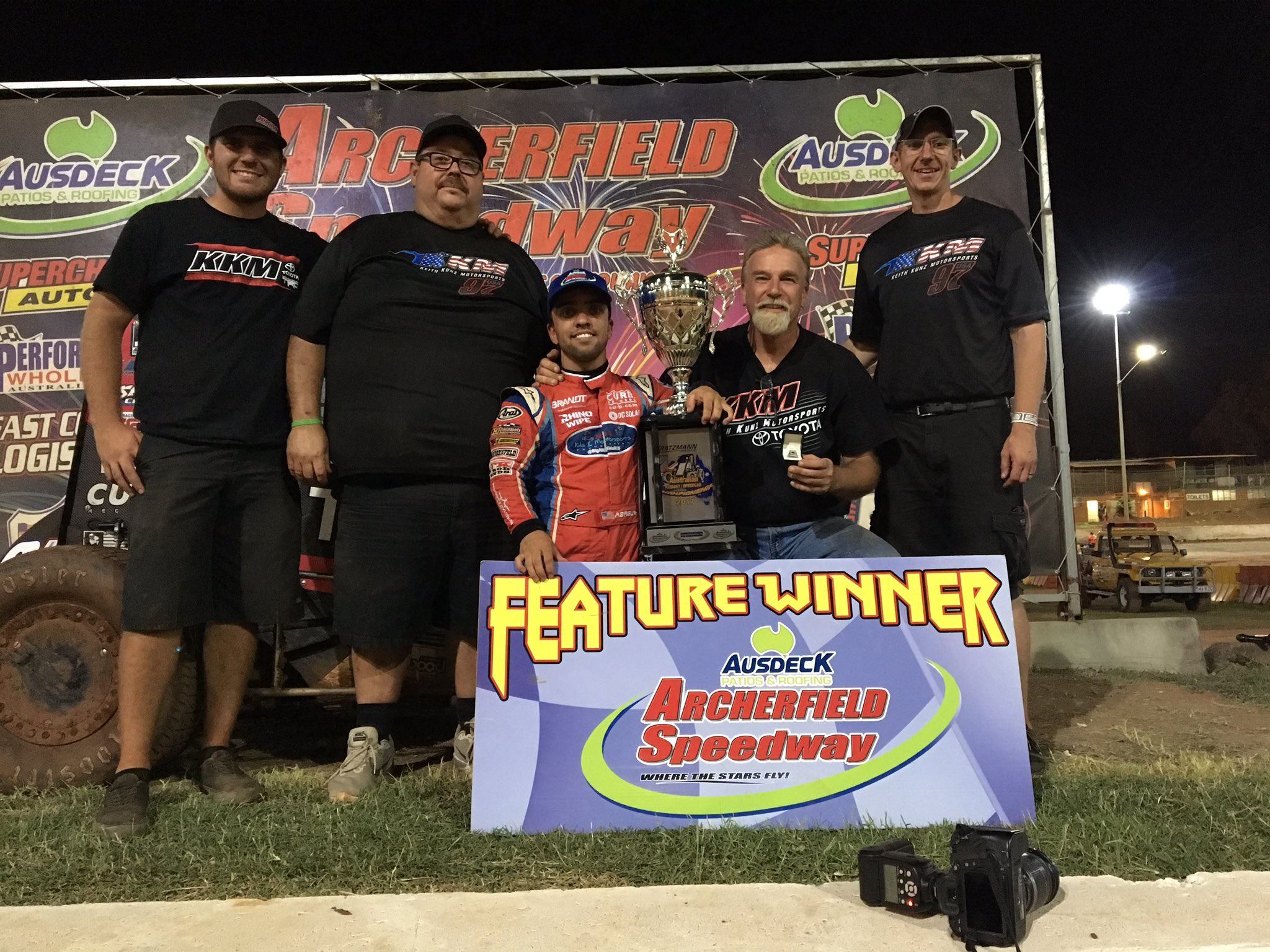 Having dominated proceedings throughout the weekend, California’s Rico Abreu led every lap of the Kratzmann Caravans Australian Midget/Speedcar Championship feature race at Ausdeck Patios Archerfield Speedway on Saturday night (February 4) to score a popular win. Abreu qualified his #97 Spike/Toyota on pole position for the championship finale and was faultless in powering to the fourth feature race win of his Australian campaign, finishing ahead of fellow American Brady Bacon and former champion Nathan Smee.

Bacon was brilliant in his charge through the field after starting 10th, surging into second spot on lap 20 and setting forth on a pursuit of Abreu that saw him narrow the margin considerably in the closing stages, ultimately finishing less than a second in arrears.

In finishing third, Smee was the best of the Australian contingent, with Pennsylvania’s Alex Bright finishing fourth ahead of Michael Stewart, who advanced from position 11 in a very strong showing. Four-time champ Adam Clarke was next best ahead of WA’s Dayne Kingshott, who was the last car on the lead lap in a race that saw just one interruption. Two more Americans in Zach Daum and Andrew Felker were next in line, with Matt Smith rounding out the top ten ahead of Brendan Palmer, who was the first Queenslander home in an event dominated by overseas and interstate competitors.

Defending champion Michael Pickens looked as though he might retain his title when he slotted into second spot on lap 12, only for his race to end four laps later when an engine problem forced him to the infield, joining fellow Kiwi Brad Mosen who had exited two laps earlier. Other casualties were Scott Farmer, Darren Vine and front row starter Hayden Williams who chased Abreu in the early going before dropping a spot to Pickens, only to regain it when Pickens expired. Williams was pushed back to third again when Bacon made his move, he dropped another spot to Smee and then found himself backsliding further before calling it quits on lap 28.Needing a win to secure a place in the feature race field, 16-year-old Kaydon Brown did exactly that in the opening heat of the night (heat 13), fending off the spirited advances of Smith to score a narrow win, with Matt Jackson third in a NSW trifecta.Scott Doyle may have momentarily believed he had Abreu’s measure in heat 14, leading the first six laps before the inevitable pass came that brought Abreu his third heat win for the weekend and ensured he finished as top qualifier. An untidy last couple of laps saw Doyle slip to third behind Kingshott.Heat 15 was one of the best races of the season with a stacked field putting on a surfeit of slide-jobs in a wonderful exhibition. It was a last lap pass from Bright that propelled him into the lead and the win, relegating Clarke to second ahead of Palmer, Bacon, Pickens and Daum.Felker proved too fast in in the final heat of the weekend, giving his championship aspirations a boost with a win over Gwilliam and Victoria’s sole representative in Travis Mills.Michael Harders downed Darren Dillon in a hastily convened C Main, with both drivers progressing into the B Main.

Doyle romped home in the B Main, eventually finishing more than three seconds clear of Vine, Farmer and Jenkins, who looked to be the last of the transferees into the feature race until Doyle found himself unable to take his place in the field, elevating fifth-placed Whittaker into the main event.

The opening round of the Pole Shuffle saw Smee defeat Daum before being upstaged by Smith in round two. Smith was subsequently beaten by Clarke, who also downed Bright before jumping the start in the clash against Pickens and being ordered to the infield. Pickens was outpaced by Williams in the penultimate clash, setting up a best-of-three final clash against Abreu, who was untroubled in winning 2-0 to secure pole position.

Sure, had Bacon started closer to the front of the field, the 40-lap feature race may have taken on a different complexion, but Abreu was the form driver of the weekend and was not going to be denied, becoming the 10th American to win the event, much to the delight of the vocal crowd.

In Compact Speedcar action, Barry Gibbes won two heats and Nathan Mathers the other, but it was Robbie Stewart who emerged an easy winner in the Garnie Laffin TQ Classic Feature Race. Mathers finished second ahead of Wayne Corbett, Trent Usher and Audie Malt, with Gibbes next best in advance of Steve Swingler and American Ty Tilton.