Tony Stewart and Ricky Stenhouse Jr. geared up to tackle the half-mile 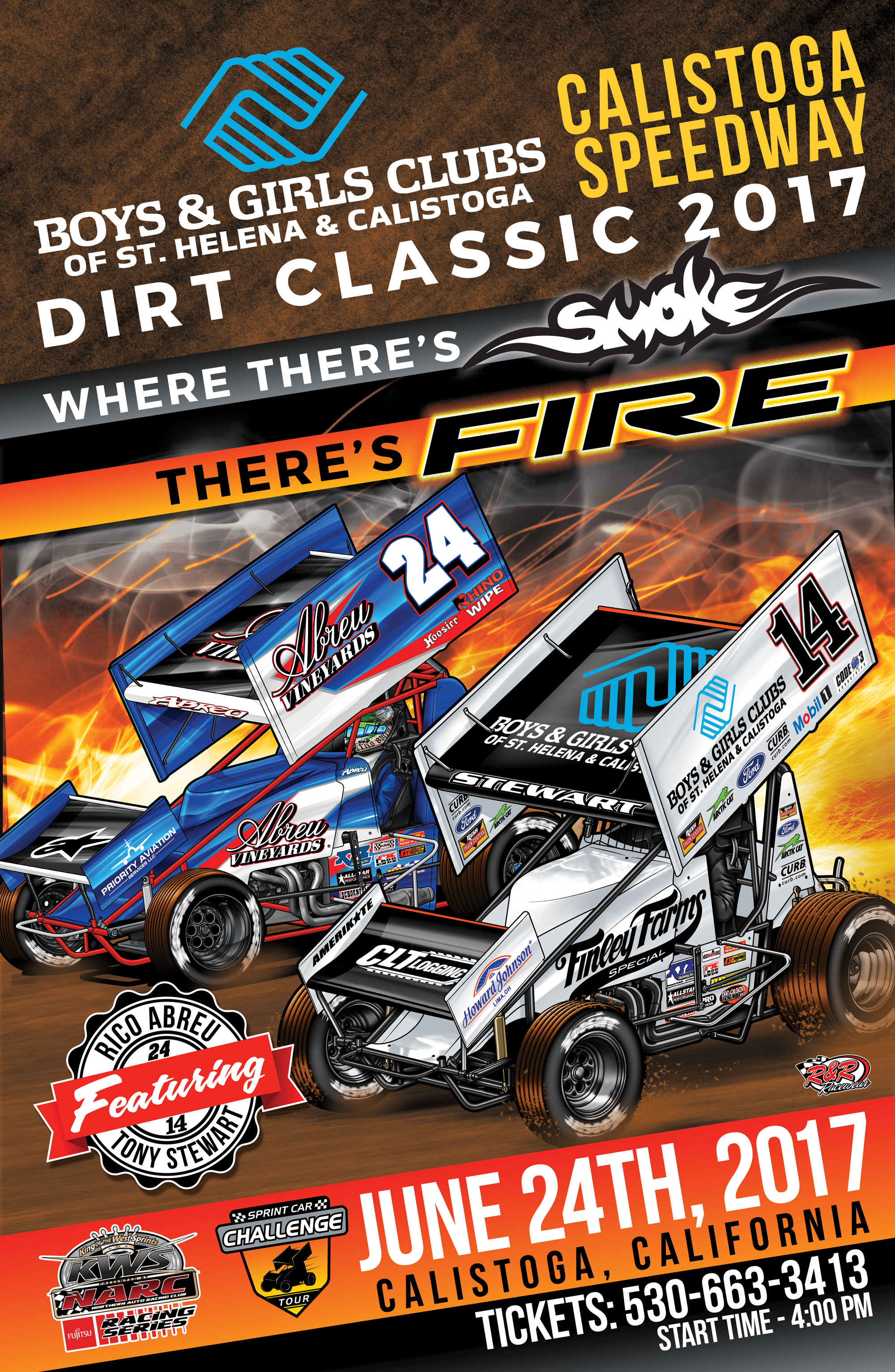 Calistoga, CA – May 22, 2017…One of the biggest and most anticipated Winged Sprint Car events in recent memory at the famed Calistoga Speedway will take place on Saturday June 24 when the “Boys and Girls Club Dirt Classic” converges at the half-mile.

The prestigious showcase will be promoted by Napa Valley businessman and major racing supporter David Abreu, along with his son, two-time Chili Bowl Nationals champion Rico Abreu. The event features a double-dose of Winged Sprint Car racing on the card with both the Elk Grove Ford Sprint Car Challenge Tour presented by Abreu Vineyards and the King of the West-NARC Fujitsu Racing Series in action.

In addition to that, three-time NASCAR premier series champion Tony Stewart and recent Monster Energy NASCAR Cup Series winner Ricky Stenhouse Jr. will be in the field, as they do battle with Northern California’s top Winged Sprint Car pilots.

Stewart is no stranger to the half-mile, having captured a USAC Western Midget Series victory in 1994, although the June 24 event will be his first career Winged Sprint Car start at the facility. He also set the midget track record that same weekend and held it until the popular division made its return to the venue in 2008.

“I’m really looking forward to running the Calistoga Speedway since I haven’t raced there since 1994,” Stewart said. “I’m also excited to see all the improvements that have taken place at the track since the last time I’ve been there. Calistoga is definitely a beautiful setting for a dirt track and one of those destination venues.”

Stenhouse Jr. is fresh off his first career Monster Energy NASCAR Cup Series win on May 7 at Talladega Superspeedway and the June 24 race will mark his first ever Calistoga Speedway start.

Along with wearing the promoter hat Rico Abreu will also be pulling double duty during the night, competing with both the Sprint Car Challenge Tour 360’s and the King of the West-NARC 410’s. The 25-year-old has claimed nine career victories at the Calistoga Speedway, including wins aboard a Winged Sprint Car, USAC Midget and a USAC Wingless Sprint Car. Abreu will certainly be one of the favorites on June 24 behind the wheel of his familiar Abreu Vineyard’s No. 24 sprinter.

“We are definitely looking forward to hosting the Calistoga Speedway Boys and Girls Club Dirt Classic,” commented Abreu. “Having Tony Stewart and Ricky Stenhouse Jr. in competition will certainly be an exciting thing for all the fans in Nor-Cal. When you add in the fact that both the Sprint Car Challenge Tour and the King of the West Series will be racing it makes for a night you don’t want to miss. We hope everyone can make it out for the event and help pack the Calistoga stands for a good cause.”

The Calistoga Speedway Boys and Girls Club Dirt Classic will mark the first ever appearance for the new Elk Grove Ford Sprint Car Challenge Tour presented by Abreu Vineyards at the track. The Winged 360 Sprint Car series has seen four night’s of racing thus far in 2017 with lots of fanfare and large car counts each night. The winner of the June 24 SCCT main event at the Napa County Fairgrounds based venue will also pocket a staggering $10,000.

Roseville’s Sean Becker currently sits atop the standings while driving the Menne Motorsports No. 75 machine. The numerous-time Northern California sprint car champion has also captured the last two Winged 360 Sprint Car events held at the half-mile and hopes to make it three in a row at the Calistoga Speedway Boys and Girls Club Dirt Classic. Paradise, CA’s Kyle Hirst, Roseville’s Willie Croft, Fremont’s Shane Golobic and Kingsburg’s Cory Eliason round out the top-five in points.

The King of the West-NARC Fujitsu Racing Series has competed in five races so far this season, with Campbell’s Bud Kaeding currently leading the standings at the helm of the familiar Williams Motorsports Zero sprinter. Completing the top-five in points as of press time are Cory Eliason, Fresno’s Gio Scelzi, Hanford’s DJ Netto and Penngrove’s Buddy Kofoid. Both Scelzi and Kofoid are just 15-years of age, showing the impressive youth movement that the series has seen this season.

Last year’s event in Calistoga saw a thrilling main event with Kaeding and Eliason battling for the win right down to the end, with Kaeding ultimately coming out on top for his third career victory at the speedway. Since the multitude of renovations were completed at the track in 2013, the last few King of the West-NARC events have provided some of the best Winged Sprint Car racing the track has ever seen.

Tickets are on sale for the Calistoga Speedway Boys and Girls Club Dirt Classic, with reserved seats $35 and general admission tickets $30. Juniors ages 6-12 will be $10 in general admission seating, while kids five and under are free. To order your seats contact (530) 663-3413. Ticket sale hours are 8am-5pm Monday through Friday.

Pit passes will be available the day of the race and cost $40. The front gate and pit gate will both open at noon, with the drivers meeting scheduled to take place at 3:45pm and cars on track at 4pm.

Stay tuned for further updates and announcements regarding the event.

The Calistoga Speedway is located on the scenic Napa County Fairgrounds in Calistoga, California at 1435 North Oak Street and has been in existence since 1937. 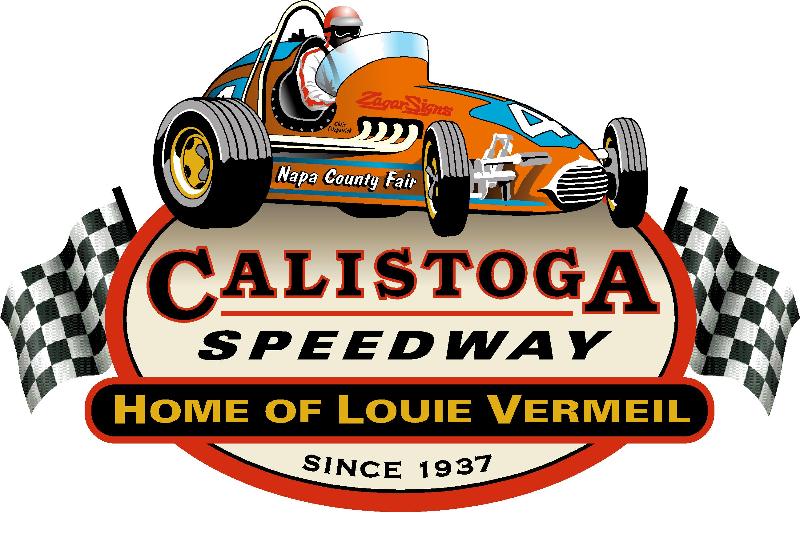