RICO REIGNS SUPREME IN KUNZ/CURB-AGAJANIAN SWEEP AT THE BURG 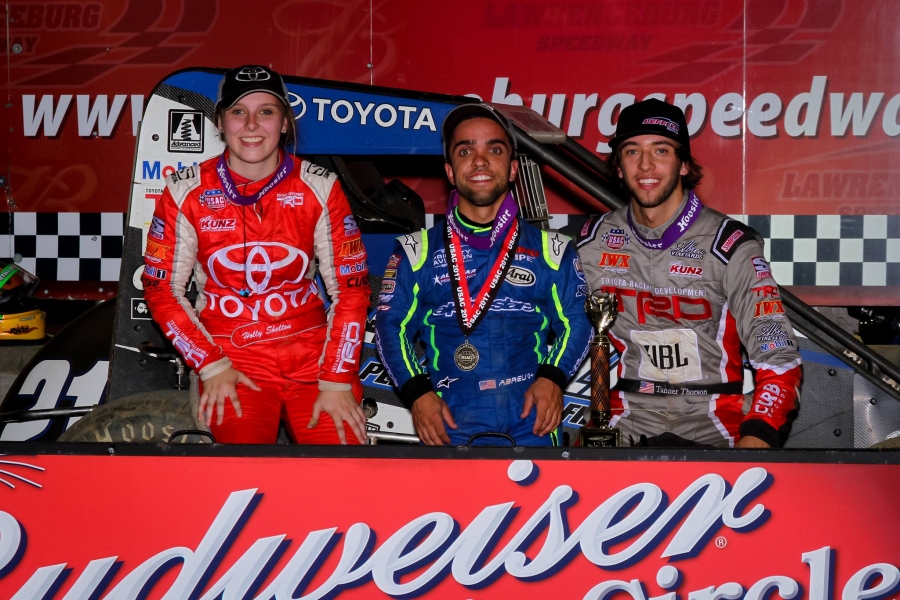 Lawrenceburg, Indiana………When you drive for Keith Kunz, you’re expected to win. No excuses.

Time and time again, the Columbus, Indiana-based team has provided the machinery that has led to 89 career feature victories and eight championships as a USAC Midget National Championship car entrant. However, throughout the series’ first eight events, the venerable team had yet to find victory lane and seemed to be reeling after only one of its five drivers was able to scrape into the top-10 the night prior at Bloomington.

It had been eight years since a Keith Kunz-led team had gone winless this far into the season, but Saturday night at Lawrenceburg Speedway was the night Kunz/Curb-Agajanian Motorsports had finally arrived in 2017, and in a big way, as the trio of Rico Abreu, Tanner Thorson and Holly Shelton duplicated Clauson/Marshall Racing’s feat from the night before by recording a 1-2-3 to sweep of the top-three spots.

After an unforgettable, dare-devilish race-long battle that saw slide-job after slide-job thrown at Shelton by two of her teammates – Abreu and Spencer Bayston – Abreu was finally able to prevail with three laps remaining to earn his 16th career USAC National Midget win and third straight at Lawrenceburg in his Keith Kunz-Curb-Agajanian Motorsports/Walker Filtration – TRD/Bullet by Spike/Speedway Toyota.

“This week has had a lot of ups and downs, but this is when it all pays off,” said a thrilled Abreu. “We were getting dicey up front and I didn’t know how I was going to get past them since it was so easy to do a crossover. Once I got my momentum going, I made sure I kept my tires spinning every time I hit the cushion just to help not bog down the engine. These motors are the best in the business. It’s a lot of fun to drive these cars when they’re on point and tonight, we capitalized on that. We didn’t qualify great, though, because I changed up my line in qualifying and that hurt us. I enjoy every moment racing with Keith Kunz and Pete Willoughby. They’ve been doing it for a long time. It makes it a lot of fun when we get up here and win.”

All five of the Kunz/Curb-Agajanian cars occupied the first five rows of Saturday’s feature starting lineup, including both spots on the front row with Ryan Robinson on the pole and Holly Shelton outside.

The transcendent story of the night from lap one was Shelton, who rode the cushion through turns one and two, then split between the cars of Justin Grant and Ryan Robinson off turn two to take the lead on the opening lap.

Action stalled at the conclusion of lap one as Indiana Midget Week point leader Michael Pickens got sideways at the top of turn one while battling Rico Abreu for the ninth position. As Pickens sat idle in the middle of the track, Alex Bright, Jerry Coons, Jr. and Adam Pierson plowed into the fracas, ending the night for all four drivers and throwing a monkey wrench into Pickens’ quest for a first Indiana Midget Week title.

On lap nine, Bayston began his trail to the front as he slid Justin Grant for second entering the first turn. Grant hit the cush, sending him sideways into a half-spin through the second turn before regaining control. However, Bayston had secured the spot and began making strides toward the direction of race leader Shelton.

With Pickens out of the night’s picture, USAC National Midget point leader Brady Bacon was poised to put his stamp on overtaking the Kiwi for the IMW lead. However, misfortune would befall Bacon on the 11th lap when he slowed to a halt to bring out a yellow. He would finish 16th.

Bayston took a run at the lead on the ensuing restart with a turn one slider across the nose of Shelton, but Shelton countered underneath, crossing over to maintain her race lead.

Meanwhile, the Kunz/Curb-Agajanian car that started furthest back in the pack, driven by Abreu, had subsequently advanced his way from tenth to fifth prior to the yellow. On the 13th lap, Abreu poked his nose to the outside on the front straight before tearing between the two Clauson/Marshall cars of Tyler Courtney and Grant at the entry of one to take third.

Shelton and Bayston remained the main players of the contest further ahead. Bayston was relentless, refusing to stay content and ride around on a rail behind Shelton. The second half of the 30-lapper began with Bayston throwing another jab at Shelton in one as he slid up to take away Shelton’s line on the brim. Shelton appeared unfazed and unafraid to keep her foot on the gas as she escaped from Bayston around the outside by the width of a strand of hair off turn two to stay atop the pylon.

The duel at the front allowed Abreu to rapidly join in on the high-speed team meeting between Shelton and Bayston. Bayston tried with all his might, but time-after-time, the second verse was the same as the first on both ends of the racetrack as Bayston’s repeated sliders came up empty handed and Shelton calmly steered back under to take the lead right back.

On the 22nd lap, Bayston finally found enough speed off the fourth corner to nip Shelton by mere inches at the line. Immediately, the two entered turn one side-by-side, yet both simultaneously met in the middle. Both Shelton and Bayston collided, sending each gliding backward toward the outside wall. Somehow, someway, both miraculously found a way to avoid the concrete and a major catastrophe as Rico got on the binders to avoid T-Boning Bayston atop the cushion. Shelton began to distance herself once again, but, unfortunately for Bayston, the smacking of wheels between he and Shelton resulted in a flat left rear tire for which he would have to replace and rejoin the field, albeit out of contention for the win.

“I got a pretty poor restart,” Shelton recalls. “I saw Spencer slide me and we crossed each other over a few times. Heading into one, we were both going to run the slider line and, unfortunately, I think my right rear tagged him a little bit. I guess he hopped over the cushion. I felt bad about it. I hate hitting anybody, let alone my teammate.”

With the absence of Bayston, Abreu aptly succeeded in the role of aggressor. On lap 25, Shelton tripped over the turn two cushion, allowing Abreu to get a fantastic run on the back straight into three, but Shelton once again was a stone cold assassin as she snared the lead back once again with five to go.

The tension was pulsating from underneath the covered gransdtand as the raucous crowd was on needles and pins with the realization that they could be a witness to racing history and the first ever female USAC National feature winner. Excitement was palpable as the throng of fans stood and pumped their fists, the roar reverberated off the metal roof and the showdown between the relative newcomer and the confident veteran came down to the quick.

Rico’s daring attempt on Shelton with three to go was the golden ticket. It repeatedly appeared that the slider could not stick with Shelton so consistently strong, but Rico stuck to his guns and the move paid off once and for all. Shelton tried to counter, but was only able to muster enough speed off two to pull even alongside Rico on the back straight. Rico carried the torch to the lead into turn three as Thorson outgunned Shelton for second on the white flag lap with a counter-steer of his own off turn two.

For the final two circuits, Rico was scot-free – and Shelton-free, as he extended a tradition of his own as a Lawrenceburg USAC Midget winner for the third time in his last three tries over Thorson, Shelton, Shane Golobic and Tyler Courtney.

Over the years, Abreu has become a certified master of the slide job. The Lawrenceburg surface fits his fearless style like a glove, but knowing when and exactly how to go for the slider is an art form that requires impeccable timing and maintaining a balance of aggressiveness and finesse that keeps one on the edge without going over.

“The bottom was too slow to roll by,” Abreu explained. “When you’re running that close to other cars and the leader’s there, it’s easy to make mistakes on the cushion when you don’t have anything to compare it to besides the speed of the car in front of you. I love doing slide jobs and running the high side like that. It’s all timing. You don’t want to be too short on them or shoot too far past the cushion. I just made sure my wheels were spinning every time I got to the cushion. I finally got clear enough of Holly to where I could slide myself in three and four and just break her momentum.”

“I was kind of sluggish on the start, but we got really good there at the end,” Thorson said. “KKM is back. Any car owner that runs top three in one night is going to be pretty happy. The crew has been working really hard to get us better and better and tonight it showed.

Holly Shelton nearly pulled off one of the major milestones in USAC history that has yet to be checked off: a female USAC National feature winner. Shelton, of Sacramento, CA, took a career-best third in her Keith Kunz-Curb-Agajanian Motorsports/Black & Decker – TRD/Bullet by Spike/Speedway Toyota, joining Sarah McCune and Stephanie Mockler as the third female driver to record multiple top-five finishes in a USAC National Midget event. Shelton finished 5th at Eldora in September of 2016.

Victory lane was a reunion of sorts for the top-three finishers in Saturday night’s feature. Shelton, Thorson and Abreu grew up throwing sliders on each other in Outlaw Kart competition at Cycleland Speedway in Oroville, California.

Shelton shared that there wasn’t any specific meeting to get the crew’s and drivers’ attention after a disappointing start to the season by Keith Kunz standards. The team responded by example, and the results indicate that fact with all six of the team’s entries finishing within the top-11.

“We stepped up,” Shelton said as matter of fact. “Every time we’re out there, the crew gives us amazing cars. it’s the drivers job to drive them. After last night, we knew we needed a good night.”