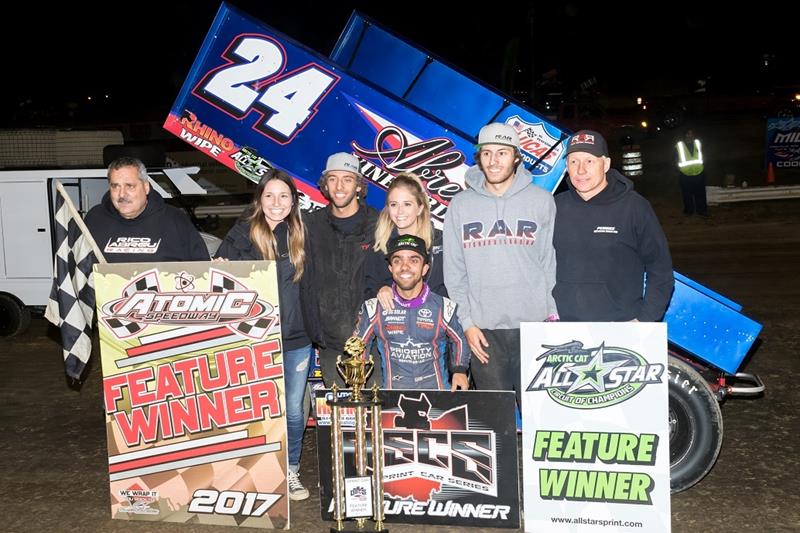 capturing the Open Wheel Championships preliminary victory worth $5,000 over a field of 46 entries. The Arctic Cat All Star triumph was the seventh of Abreu’s impressive career; his first-ever at the Atomic Speedway high banks.

“I just gotta thank my guys for getting this car right where it needed to be tonight,” Abreu explained, pilot of the Abreu Vineyards/Priority Aviation/Alpinestars/Rhino Wipes/No. 24. “Our car has been really close the last few weeks. We put ourselves in really good position tonight in relation to how the track was. I felt like we were really good right away. My guys have been clocking in a lot of work. It all pays off when you are standing up here with the trophy.”

On a surface narrowed by its abrasiveness, Abreu led all but one circuit of the 30-lap main event, swapping positions with Tony Stewart just after the pair reached traffic for the first time. Stewart worked by Abreu to officially lead lap 11, but after a side-by-side battle during the entire following circuit, it was Abreu who would lead lap 12. From that point forward, it was all Abreu at the front of the field, chased to the final checkers by Stewart, Cole Duncan, Lee Jacobs and Joey Saldana.

“I caught him sleeping as traffic started to get him backed up,” Tony Stewart said. “I saw where he went, so I went in a different spot and got a run on him. I just wasn’t fast enough to hold him off. He got through traffic tonight a lot better than I did. He was definitely the better car and driver.”

“He lets me stay at his house in the summertime, so I had to be pretty nice to him there,” Abreu laughed. “You have to give Tony a lot of respect. He is just as hungry as any of us out here racing.”

“I think he got himself a little too high when he got around me. That allowed me to get back below him,” Abreu continued. “I was able to get through the center a little bit better than him. I think it would have been a really good race even if it didn’t take rubber. Towards the end, I was starting to worry about my tires. At that point, all you can do is race and pray.”