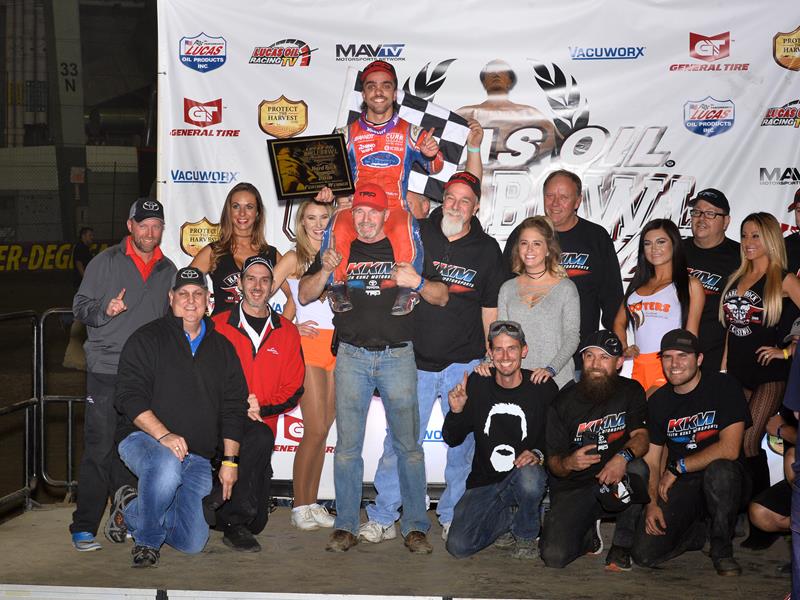 TULSA, Okla. (January 10, 2018) After 15 ½ weeks out of a Racecar following a hard crash at the Four Crown Nationals, California’s Rico Abreu was the class of the field in Wednesday’s Hard Rock Casino Qualifying Night A-Feature.

Securing a spot in his sixth career Lucas Oil Chili Bowl Nationals presented by General Tire championship A-Feature with his third career prelim triumph, Abreu’s win was a true testament to his talent and patience behind the wheel, answering nearly 20 laps of slide-jobs from Oklahoma’s Tyler Thomas.

“That’s some intense shit,” said Abreu in Victory Lane of the race with Thomas, which despite its intensity, never saw the pair drive each other in an unprofessional manner.

Elaborating on the race in the press conference, Rico stated, “I don’t think it gets any better or intense than that, especially because you are racing for the lead. On these slide jobs, people come up short and run into each other and that’s when you see wrecks, but I feel like it goes both ways in these situations where if you’re the leader getting slid, you let out of the gas and let them slide across, then turn down and drive right back by him. That’s the way it was done tonight.”

Giving chase to Thomas through the first four laps, the race for the point went three-wide on the fifth revolutions with Alabama’s Kevin Thomas, Jr. taking the lead. Unable to hold of Tyler Thomas the following lap, the caution would fall as the field worked Lap 7 with the caution lights coming on for Parker Price-Miller.

Back to Lap 6, Abreu slung his Keith Kunz Motorsports No. 97 to the curb, picking off second on the restart and setting sights on the lead. Narrowly edging out Tyler off the fourth turn to complete Lap 9, the lead was in his hands off the second turn of Lap 10.

Back to the advantage of Tyler Thomas two laps later, the pair resumed their exchange of bottom to top corners before the caution again came out. Protecting the low line from the slide, the top was clear for Abreu to build his run. With a full head of steam, Rico pulled the trigger and snagged the lead away on Lap 15. The only time during the race that the No. 97 had distance over the race for second, yellow lights appeared again with 19 laps complete.

Slide for slide with the BT Machine No. 91t with Abreu able to make it around first every time, the final caution with two to go was still not enough to deny the California shoe a much-awaited return to Victory Lane.

Crossing 0.655 seconds ahead of Tyler Thomas, the final podium step and transfer spot into Saturday’s A-Feature, remained in the hands of Kevin Thomas, Jr. despite the pressure of having Sammy Swindell on his back bumper the final 10 laps. Exchanging fifth numerous times with Ryan Robinson over the course of 25 laps, the top-five would finally round out with Chris Windom.

Robinson in sixth was trailed by the very hard charging Jason McDougal. Having to come from 11th in the second C-Feature, McDougal advanced position 34 times to earn his seventh-place finish. J.J. Yeley eighth was chased by Gary Taylor with Jeb Sessums, who was the Hard Charger for the A-Feature with 14 positions gained, rounding out the top-ten.

A field of 85 drivers drew in for Wednesday’s Hard Rock Casino Qualifying Night. So far, 171 drivers have seen action in the 32nd Lucas Oil Chili Bowl Nationals presented by General Tire. Going into Thursday, the Fastenal Flip Count has reached 34 with Brady Bacon getting a HANS Device from Simpson Race Products as the event’s 25th flip. In all, every crash ended with the driver able to walk away.