Rico Abreu battles for top-ten with World of Outlaws at Volusia, Consistent with All Stars in Ocala 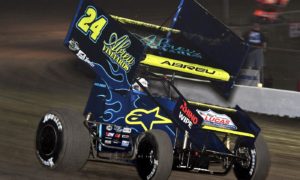 DE LEON SPRINGS, Fla. (February 13, 2018) – St. Helena, California’s Rico Abreu battled with the nation’s best during his February trip to the Sunshine State, joining the Arctic Cat All Star Circuit of Champions presented by Mobil 1 and the World of Outlaws Craftsman Sprint Car Series for a total of eight events over an 11-day period.

When the dust settled at the end of his near-two-week campaign, Abreu found himself with speed and consistency, ultimately scoring a top-ten finish against the Greatest Show On Dirt at Volusia Speedway Park, also scoring a consistent trio of finishes just outside of the top-ten with the All Star Circuit of Champions at Bubba Raceway Park.

“It wasn’t a bad way to start our season. I think we were capable of performing better, but we’ll shake this off and move forward,” Rico Abreu explained, pilot of the Abreu Vineyards/Lucas Oil/Rhino Wipe/Alpinestars No. 24. “It’s always tough in Florida. The best teams in the country get their seasons started down there so you have to be on point every night.”

Consistency played a major role in Abreu’s success during the early segment of his Florida visit on February 1-3. During three nights of Winter Nationals competition at Bubba Raceway Park, the California native finished no worse than third during all three All Star Circuit of Champions heat races, ultimately earning a dash appearance on Thursday, February 1; the result of scoring the quickest time during his respective group qualifying effort.

Abreu was scored 12th, 11th, and 12th, respectively, during his three-night campaign against the All Stars at Bubba Raceway Park. Unfortunately, Thursday’s effort was cut short after being tangled in a late-race caution; he was battling for a top-five performance.

Abreu highlighted his trip to the Sunshine State with a top-ten finish against the World of Outlaws Craftsman Sprint Car Series during the DIRTcar Nationals, finishing sixth, officially, on Friday night, February 9, to help the Greatest Show On Dirt launch their 40th Anniversary Season. Abreu started fourth on the main event grid, the result of a fourth place finish during the Craftsman Club Dash, all after finishing second during his respective heat race.

“That was our best night, for sure,” Abreu expressed, a former World of Outlaws winner and 15-time top-ten finisher with the Greatest Show On Dirt in 2017. “We were able to find speed early and take advantage of our heat race finish and dash finish. You can’t find yourself in a hole during these World of Outlaws races. You have to stay patient and put the entire night together.”

“A trip like this is demanding and it wouldn’t have been possible without my team and those who support my efforts,” Abreu continued. “My dad and Abreu Vineyards, Lucas Oil, Rhino Wipe/Alpinestars; they all play a huge role. I have 110 races on my schedule this year. The plan is to clear our heads, regroup and move on to the next one.”

Abreu’s plans for the next few weeks have not been finalized. News regarding an upcoming schedule will be posted when it becomes available.

Fans are encouraged to follow Rico Abreu online, as well as on all of the available social media networks.