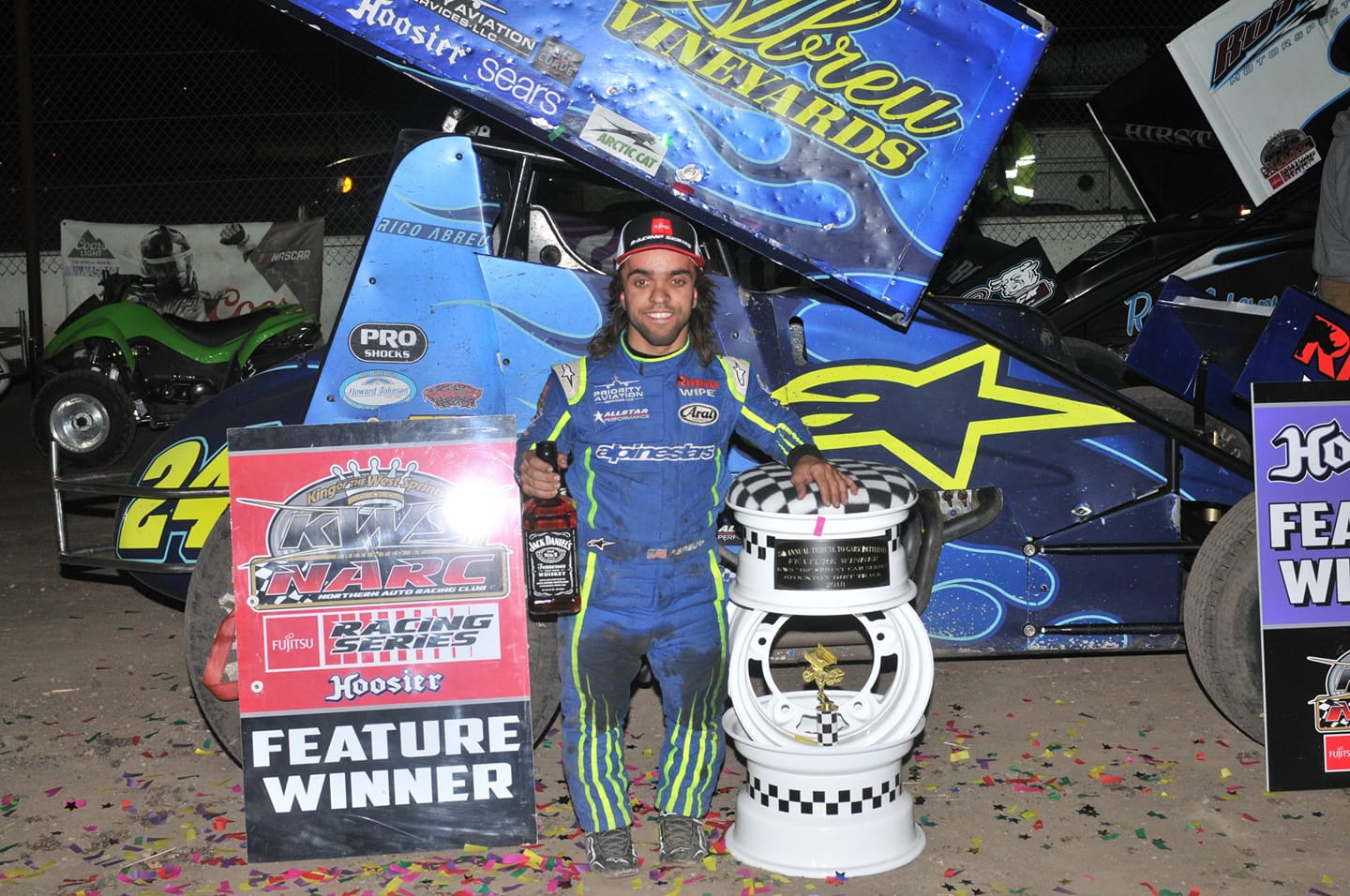 ST. HELENA, Calif. (November 6, 2018) – The weekend kicked off slow, but picked up in a hurry as Rico Abreu capped off his 2018 winged sprint car season with a victory at Stockton (Calif.) Dirt Track. Abreu, driver of the Rico Abreu Racing/Abreu Vineyards/Alpinestars/Lucas Oil/Rhino Wipe/Priority Aviation/No. 24 sprint car, earned his fifth win of the season during the King of the West-NARC Sprint Car Series finale. It was Abreu’s third victory of the year in the state of California, adding his Stockton triumph to a list that already includes Silver Dollar Speedway and Keller Auto Speedway.

“I can’t thank my team enough for all of their hard work and dedication this season. We’ve had a lot of tough times, but the good times always outweigh the bad. We’ve molded into a family and I wouldn’t want to be with anyone else right now,” Rico Abreu said of his Rico Abreu Racing crew. “We had a busy weekend at Stockton. The guys held tough and worked their butts off. I’m proud of what we were able to accomplish.”

After a tough start to the weekend at Stockton Dirt Track, provoked by a ‘DNF’ finish during Friday’s non-sanctioned 360 main event, Rico Abreu rebounded in a big way on Saturday and scored a pair of top-five finishes against two of California’s premier sprint car sanctioning bodies.

The season finale for each of the traveling sprint car series, Rico Abreu kicked-off the Tribute to Gary Patterson at Stockton with a fifth place performance during the Sprint Car Challenge Tour (SCCT) 360 program. The St. Helena, Calif., native started third on the feature grid and locked himself into the main event by finishing second during his respective heat race, just before finishing third during the SCCT dash.

Making the quick jump from one car to the next, Abreu concluded the Tribute to Gary Patterson with a $5,000 victory during King of the West competition. An exciting end to his season, nonetheless, Abreu started third on the feature grid, but was unable to make the winning move around Roth Motorsports’ Kyle Hirst until late, taking command officially with three laps remaining.

“That was a fun finish; definitely a great way to end our season in a winged sprint car,” Rico Abreu continued. “Things kept getting better and better for us as the months rolled by. Hopefully we can move that momentum into next year.”

Rico Abreu will spend a few weekends away from competition before returning to the driver’s seat on Wednesday & Thursday, November 21 & 22, for the 78th edition of the Turkey Night Grand Prix at Ventura (Calif.) Raceway. The USAC Midget program will award a $6,000 top prize.