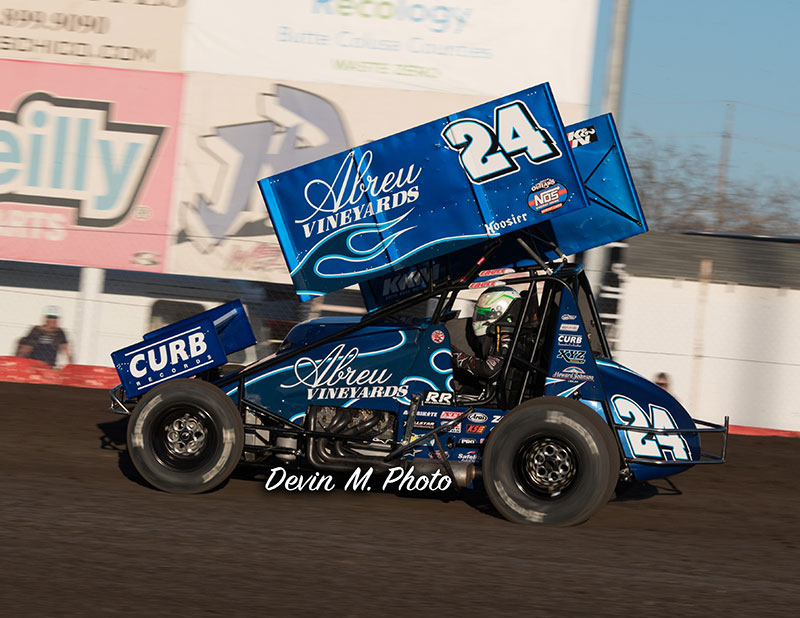 ST. HELENA, Calif. (March 18, 2019) – Rico Abreu’s weekend in his home state of California was a success, officially terminating his streak of poor luck with the World of Outlaws Sprint Car Series by securing back-to-back top-ten performances during starts at Silver Dollar Speedway and Stockton Dirt Track.

Although impressive, finishing tenth and sixth, respectively, during his World of Outlaws starts at Silver Dollar and Stockton, Abreu was forced to do things the hard way all weekend, actually rallying from last on Friday at Silver Dollar Speedway, all before losing a handful of positions on Saturday as the result of a spin while battling for a position inside the top-five.

“It was a wild weekend, but we recovered and that’s the bottom line,” Rico Abreu explained, driver of the Rico Abreu/Curb Agajanian Racing/Abreu Vineyards/Curb Records/Southern Pacific Farms/Lucas Oil Products/Priority Aviation/No. 24 sprint car. “We keep getting better and better each weekend. We had a few recent starts that we needed to shake off, but now we have some positive momentum on our side. All we can do now is take advantage of that momentum.”

Rico Abreu’s visit to Silver Dollar Speedway on Friday, March 15, was on pace to be flawless. After qualifying first within his group, and winning his respective heat race, Abreu moved on and finished sixth during the evening’s dash, thus allowing the St. Helena, Calif., native to start sixth on the feature grid.

While battling for a position well-inside the top-ten, Abreu made contact with fellow Californian, Tim Kaeding, on lap six. The contact resulted in Abreu coming to a stop, thus forcing the familiar No. 24 to restart at the tail of the field. Although frustrated, Abreu kept his composure and bounced back for a top-ten, ultimately crossing under the final checkers tenth in the running order.

In a similar scenario on Saturday at Stockton Dirt Track, Abreu was on the tail end of charge from 14th to sixth when he lost the handle and spun in turns three and four. Luckily, Abreu never lost momentum nor came to a stop, allowing the former World of Outlaws winner to blend back into the running order with only half of the laps in the books. Abreu recovered quickly, eventually moving ahead to finish sixth at the final checkers.

Rico Abreu and Rico Abreu/Curb Agajanian Racing will continue their 2019 campaign with another round of World of Outlaws West Coast Swing action, this time visiting Ocean Speedway just south of San Jose on Friday, March 22, followed by a stop at Placerville Speedway on Saturday, March 23.