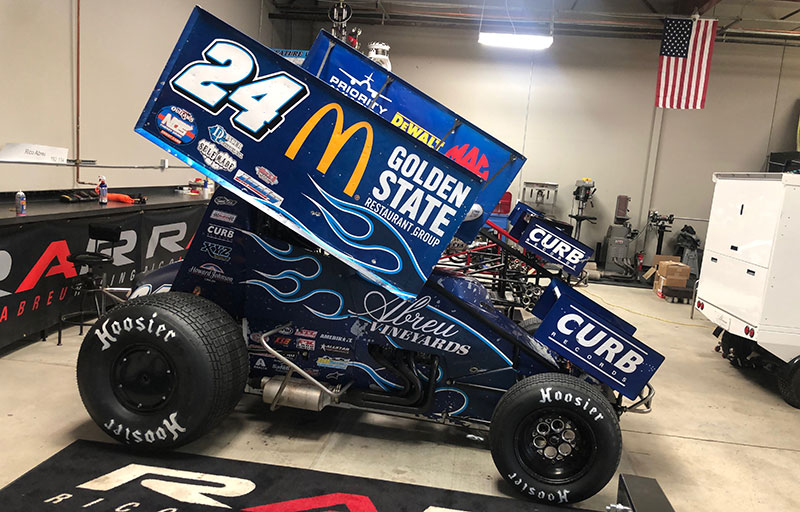 ST. HELENA, Calif. (August 21, 2019) – Effective immediately, St. Helena, California’s Rico Abreu and Stockton, California-based Golden State Restaurant Group have joined forces and will make their 2019 debut later this evening – Wednesday, August 21 – at Placerville Speedway in Placerville, California. Family owned and operated since 1966, Golden State Restaurant Group (GSRG) owns a network of 43 McDonald’s franchises located throughout much of northern and central California, stretching from Modesto in Stanislaus County to the state capital in Sacramento County. With the intent to shine light to their company’s mission of providing excellent service, guest satisfaction and community involvement, Golden State Restaurant Group will rally behind Rico Abreu/Curb Agajanian Racing during 22 events throughout the next four months kicking-off with King of the West-NARC Series competition in Placerville. All 22 nights of action with Golden State Restaurant Group on the wing panel, ranging from World of Outlaws action to Sprint Car Challenge Tour 360c.i. competition, will be contested within the heart of California’s open wheel scene. “On behalf of the Golden State Restaurant Group, we are excited to be in the position to be able to support and partner with Rico Abreu and Rico Abreu Racing,” expressed Dylan Schrader of GSRG, a restaurant owner. “We look forward to not only supporting Rico and his team throughout the racing season, but we are also excited to involve the community in order to expose this new relationship we have formed. Best of luck to Rico and team on the remainder of the season.” “We are very excited to have Golden State Restaurant Group join our team for the next few months. I’m confident we’ll do a great job in representing their organization at the highest level,” Rico Abreu said. “They not only provide a great service, but they also do wonderful things for the surrounding communities within their restaurants’ markets. We want to do our part in sharing their mission with the race fans. It’s going to be a lot of fun.” Rico Abreu and Golden State Restaurant Group will activate their partnership in a big way by not only participating in KWS-NARC action on Wednesday at Placerville, but they will also enter KWS-NARC action at Silver Dollar Speedway in Chico on Thursday, August 22, followed by a two-day visit to The Stockton Dirt Track on Friday and Saturday, August 23 & 24. About Golden State Restaurant Group:The Golden State Restaurant Group was initially founded by Don and Jean Schrader in 1966. It was previous known as McDonald’s of San Joaquin county. It later evolved into the Golden State Restaurant Group as the Schrader family continued to grow their brand by attaining more restaurants for a total of 43 restaurants not only in San Joaquin county, but also in Stanislaus, Sacramento, and Amador counties. GSRG has worked as a community partner to contribute thousands of local jobs. McDonald’s helps people reach their full potential. For many, McDonald’s provides an individual’s first employment opportunity: the first chance to gain work skills, expand and learn life skills, discover how to handle difficult situations, receive leadership training, and become prepared for future opportunities for career success. Everyone at our company is dedicated to making the Golden State Restaurant Group experience a great one. The restaurants within our organization are the best in service and proven guest satisfaction. We pride ourselves on equal opportunity employment, community involvement, clean facilities, fast service, and hot, fresh food.For more information, visit www.goldenstatemcd.com. Like us on Facebook or find us on Instagram/Twitter at @goldenstatemcd. SOCIAL MEDIA:Fans are encouraged to follow Rico Abreu online, as well as on all of the available social media networks. Facebook at https://www.facebook.com/RicoAbreuRacing, Twitter at https://twitter.com/Rico_Abreu, or on Instagram at https://www.instagram.com/rico_abreu/ APPAREL:Those seeking the lastest Rico Abreu Racing apparel should visit shop.ricoabreu.com. Abreu’s traveling merchandise vehicle will be a select events in 2019. A complete list of at-track merchandise availability can be found on Rico Abreu’s racing calendar via www.ricoabreu.com. Rico Abreu Racing: http://ricoabreu.com/ 2019 Rico Abreu Racing Statistics: (thru August 20, 2019)Total Races: 50Total Wins: 4Total Top-5s: 19Total Top-10s: 33**Stats only reflect starts in RAR #24 Sprint Car ### CONTACT:Photo Credit: RAR MediaTyler AltmeyerRico Abreu/Curb Agajanian Racing(724) 954-4915, altmeyer119@gmail.com